For someone who doesn’t drive, Seanan McGuire can sure wax poetic about the open road. 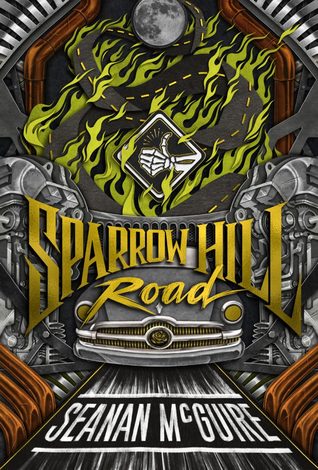 Covers from Goodreads, and while we’re there, let’s review the synopsis:

Rose Marshall died in 1952 in Buckley Township, Michigan, run off the road by a man named Bobby Cross—a man who had sold his soul to live forever, and intended to use her death to pay the price of his immortality. Trouble was, he didn’t ask Rose what she thought of the idea.

They have names for her all over the country: the Girl in the Diner. The Phantom Prom Date. The Girl in the Green Silk Gown. Mostly she just goes by “Rose,” a hitchhiking ghost girl with her thumb out and her eyes fixed on the horizon, trying to outrace a man who never sleeps, never stops, and never gives up on the idea of claiming what’s his. She’s the angel of the overpass, she’s the darling of the truck stops, and she’s going to figure out a way to win her freedom. After all, it’s not like it can kill her.

McGuire is absolutely in her element in Sparrow Hill Road, her poetic prose driving the story forward, one heartbreaking page at a time. Part love poem to the open road and freedom, part ghost story, Sparrow Hill Road is gripping and lovely and made me cry while keeping me on the edge of my seat.

The story isn’t entirely linear and is full of interconnected vignettes that form the skeleton of Rose’s ghostly existence. Instead of her day to day existence, we visit Rose during the most important parts of her unlife.

The Girl in the Green Silk Gown, the sequel to Sparrow Hill Road, is due out July 3, 2018 and I am so excited!

New stationery day! Gorgeous pen koozies from @rickshawbags, a new @kaweco.germany lavender pen and a new @robertostersignature ink in Australis Rose from @lemurink
Happy Valentine's Day to the love of my life! This is the 12th time I've had the pleasure of celebrating with you and I look forward to many more.
Foccacia this good doesn't need a filter. #DessertPerson
I found the perfect tools to create my #FieldGuideToMemory game journal. I felt the pantone color name was particularly appropriate.
Today I made @csaffitz's blood orange olive oil cake off the cover of her baking book #DessertPerson. It is a delicious option for a savory dessert lover like myself. I am mildly obsessed with this cake.
Had a nice weekend in Bellingham, safely away from anyone, celebrating @fairytalesandcurls birthday! (We quarantined very carefully ahead of time) This hike along Lake Whatcom was so gorgeous.