In The Phoenix Empress we finally learn what happened to O Shizuka in the eight years that she and her wife Shefali were separated.

Since she was a child, the divine empress O Shizuka has believed she was an 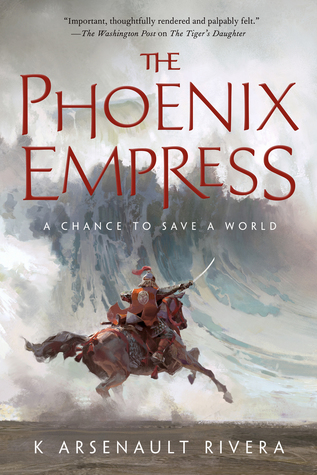 untouchable god. When her uncle, ruler of the Hokkaran Empire, sends her on a suicide mission as a leader of the Imperial Army, the horrors of war cause her to question everything she knows.

Thousands of miles away, the exiled and cursed warrior Barsalyya Shefali undergoes trials the most superstitious would not believe in order to return to Hokkaran court and claim her rightful place next to O Shizuka.

As the distance between disgraced empress and blighted warrior narrows, a familiar demonic force grows closer to the heart of the empire. Will the two fallen warriors be able to protect their home?

Shizuka and Shefali are together at last, but they’ve both changed so much. Shefali wonders if Shizuka has changed too much, and struggles with Shizuka’s imperial duties. Shizuka haltingly, painfully shares her story with Shefali who grows to understand that her wife did not live eight years in pampered safety while Shefli was exiled from the Empire. She learns just how strong her wife is, for all that their strengths are opposite.

The Phoenix Empress expands upon and fleshes out the racism that was first introduced in The Tiger’s Daughter between the Hokkarans, Xianese and Qorin. It’s pretty violent and bloody and The Phoenix Empress explores those feelings from all sides. Shizuka is a benevolent ruler who tries to improve things by breaking up the Empire and allowing conquered lands to become sovereign again, to the horror of the Hokkarans.

Unfortunately for the reader, Shizuka is not as interesting a storyteller as Shefali so the story dragged on somewhat during her retellings. The Phoenix Empress bounces between the past and present struggles better than The Tiger’s Daughter did, and the present-day struggles were are more compelling than those of drunk Shizuka from the first novel which almost makes up for Shizuka’s storytelling style.

This book won’t be for everyone, but I enjoyed it enough that I’m looking forward to the third book.

The Phoenix Empress was released October 9 and is on shelves now.

Thank you to Tor Books for providing me with an eARC in exchange for my honest review.

Spent the last two evenings building this @lego typewriter set. It was really fun. Eli got it for my birthday in August and now that we are sort of settled into the house I was ready for a project.
Fighting sleep....
A delightfully snowy day. Hope it melts by tomorrow.
Om nom nom, let's eat!
Happy #GotchaDay to my sweet Bits kitten. One year ago today I literally pulled a gotcha and snatched her from a dumpster behind a Wallgreens. My tiny potato kitten has been through a lot in this first year (so much moving, so many vet visits, two surgeries) and she is really growing into such a sweet kitty.
A cookbook club dinner with @fairytalesandcurls last night. We cooked several recipes from the Paris chapter of @chefreneeerickson's wonderful cookbook #Getaway. Really tasty food. Lots of uses of mustard and a wonderful way to highlight local @lummiseafoodmarket seafood-the smoked salmon and clams. Looking forward to our next chapter, Normandy!