The conclusion to Katherine Arden’s Winternight Trilogy in The Winter of the Witch is stunning and satisfying. I couldn’t imagine a more perfect ending. 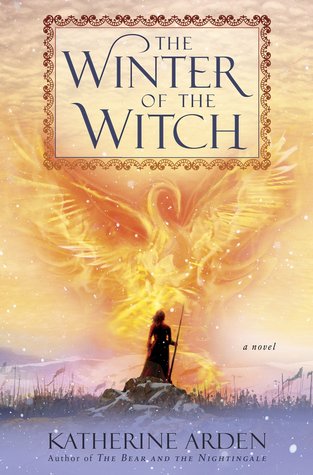 Tower, Vasya and Morozko return in this stunning conclusion to the bestselling Winternight Trilogy, battling enemies mortal and magical to save both Russias, the seen and the unseen.

Now Moscow has been struck by disaster. Its people are searching for answers—and for someone to blame. Vasya finds herself alone, beset on all sides. The Grand Prince is in a rage, choosing allies that will lead him on a path to war and ruin. A wicked demon returns, stronger than ever and determined to spread chaos. Caught at the center of the conflict is Vasya, who finds the fate of two worlds resting on her shoulders. Her destiny uncertain, Vasya will uncover surprising truths about herself and her history as she desperately tries to save Russia, Morozko, and the magical world she treasures. But she may not be able to save them all.

Katherine Arden has absolutely given new life to these characters from classic Russian folklore. Morozko and Medved and Vasya all leap off the page with flaws and weaknesses and strength and motivation. I was sucked in and captivated from the start.

I will say though, I had to close the book for a moment when a very traumatic scene came up. There’s a pretty heartbreaking character death very early on in the book, and unlike some books, the loss is palpable and resounds throughout the whole book in a way that feels genuine. I never found myself impatient with Vasya’s grief, because I myself felt it along the way. I was so invested in this character that their death hurt.

The ending is the perfect kind of ending for a fairytale like the Winternight Trilogy. It’s exactly how the story needed to end. Arden says in the notes at the back of the book that she has had the ending planned since the beginning, and it certainly feels as though she did. It doesn’t feel rushed or desperate. The ending fits Vasya’s story perfectly.

The Winter of the Witch is on sale now.

Thank you to Del Rey for providing me with an ARC in exchange for my honest review.

One thought on “The Winter of the Witch – Katherine Arden”